Do you know the difference between internet, intranet and extranet? If you want to get the necessary information about these terms, stay with us.

Many people confuse the two terms Internet and Intranet. There are many differences between the two, for example, the Internet is open to everyone, while an intranet, as a private organization, requires permission to access.

Since the Internet is open to everyone, there was a need to create another network that is exclusive to a specific area such as a private organization or community, school, college, university, etc. As a result, intranet and extranet emerged.

To get answers to these questions, stay with Tekrato.

The best WhatsApp alternative in Iran; What to install a program similar to WhatsApp?

The difference between internet, intranet and extranet

Maybe it is better to understand concepts such as internet, intranet and extranet first to define them. 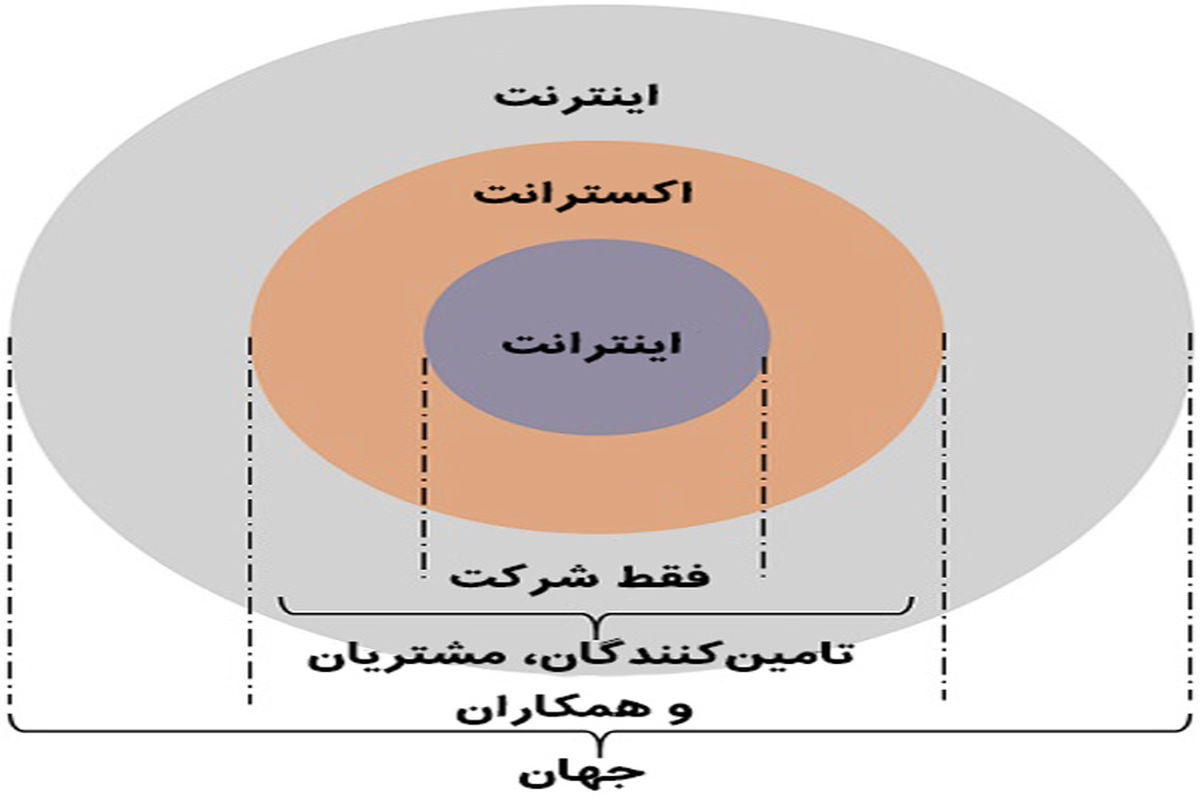 What is the Internet?

The word (inter) means between and refers to the connection of millions of computers worldwide that form a network together. If two computers are connected to this network, they can communicate with each other.

In fact, the Internet is a network formed by connecting computers all over the world. The main reason for the creation of this huge network was the exchange of information. There are a large number of computer and electronic devices that create this network and communicate. Some of this equipment is on the ocean floor (such as cables) and some is in the sky (such as satellites).

Even your mobile and computer are part of the internet. In addition to these, there are a number of software and programming codes in the background that enable internet activity. In fact, when you connect two computers together with a network cable, a local area network called a LAN is created. If you connect various devices such as mobile phones, TVs, laptops or any other electronic device to a modem or router via Wi-Fi, a wireless local area network called WLAN is formed. It is necessary to know that the Internet is the most famous network in the whole world.

Regarding the history of the Internet, it should be said that its origin dates back to 1969. At the time, the U.S. Department of Defense had a division called the Advanced Research Projects Agency (ARPA) that funded major projects across the United States.

At that time, they supported the development of the Computer Link Project to facilitate data transfer between universities. They named this project ARPANET, which can be considered as the first Internet.

An extranet is a private network that uses Internet technology and a public telecommunications system to share part of the information or operations of a business with suppliers, vendors, partners, customers, or other businesses.

An extranet can be considered as a part of a company’s intranet that extends to users outside the company and requires security and privacy.

These can include managing a firewall server, issuing and using digital certificates or similar user authentication tools, encrypting messages, and using virtual private networks (VPNs) that are tunneled through the public network. 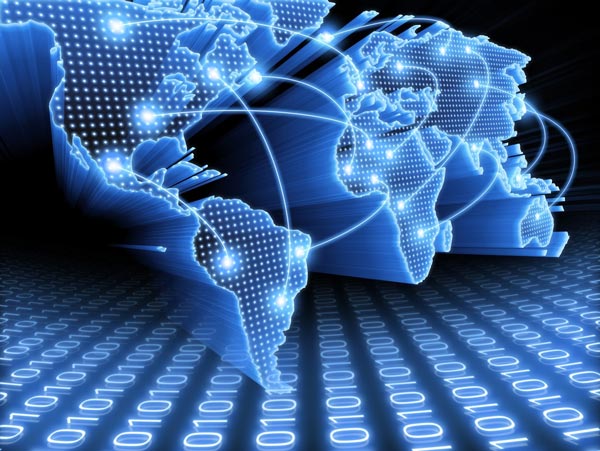 An extranet is a personal network that uses Internet Protocol and network connections and provides the possibility of using a mass remote communication system to secure the information exchanged by organizations or departments by workers, vendors, partners, customers, or other businessmen.

In short, an extranet can be a personal internet above the internet that is completely privately operated.

The history of using the word extranet dates back to the 1990s and early 2000s. When different industries whose members were geographically distant from each other or several teams cooperated to implement a project, they used the word extranet for the first time to share information.

What is an intranet?

An intranet is a private network accessible only by authorized users. The prefix intra means internal and this means it is designed for internal communication. In fact, an intranet is a small version of the Internet with similar capabilities, but only inside the company or organization.

Intranet, like the Internet, uses network technologies such as Transmission Control Protocol/Internet Protocol (TCP/IP). Some intranets are limited to a specific local area network (LAN), while others can be accessed remotely over the Internet.

Local intranets are generally the most secure as long as they are only accessible from within the network. To access the intranet through the wide WAN network, it is usually necessary to enter a username and password. 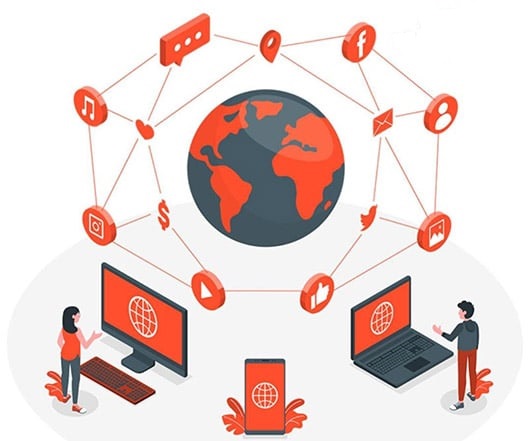 Intranet is actually a simple and cost-effective intra-organizational communication system through which companies can communicate continuously and cheaply, especially when they are in different geographical locations.

An intranet can improve the productivity of managers because it helps them spend more time analyzing information instead of searching for and receiving information.

Now that we have examined all three concepts separately, we must explain the difference between the Internet, intranet, and extranet.

The best WiFi hacking program; How to hack Wi-Fi?

The best game hacking program; Enjoy the game without limits

What is the difference between internet, intranet and extranet?

If we consider the word net in the meaning of network:

The difference between internet, intranet and extranet is their availability. The Internet is public, while the other two concepts are restricted in access. Most of the users use the Internet, and if they want to share files and resources in a certain place, they use the intranet, and if a group wants to remotely access the network they have built, they use the extranet.

So, regarding the difference between the Internet, Intranet, and Extranet, it should be said that the Internet is a public network, while the other two networks are private. Internet access is possible from anywhere in the world, but the other 2 networks are only for a specific organization.

For the first time, this plan was proposed in the 9th government by the Minister of Communications, Mohammad Soleimani. The executive policy for starting the work of the national information network was based on the disconnection of domestic users with the international web network, which was one of the biggest concerns of Internet users in Iran.

According to the new law, the national information network will be based on the Internet Protocol (IP), and switches, routers, and data centers will also be deployed alongside it, so that internal access requests to information stored inside the country can be made through the external Internet network. not available

But what is the international Internet? When the server of a website is located outside of Iran, your request is sent from inside Iran to the routers and its server to a destination outside the country. The answer sent from that site is also sent to your computer on the same platform.

Therefore, sending and receiving information takes place outside of Iran. The volume used to send and receive this information to the server abroad is called foreign traffic. In this case, your internet is international.

So the first difference between national internet and international internet is in the range of data routing. In fact, in the domestic Internet, when a system inside Iran is requested to open a website, the data travels through the routers inside Iran and reaches the server. In this case, the source system, routers and servers are all located in Iran.

Insta JB; Download, install and learn how to use GBInstagram

What is the difference between national intranet and internet?

A national intranet is a closed intranet computer network based on the Internet Protocol that is built and maintained by a national government or created by the private sector and connects national databases to each other.

The main purpose of the national intranet is to monitor communications within a country, cut off access to outside media, reduce costs, reduce cyber attacks, or network independence. Such networks are usually associated with state-owned media and alternatives to foreign services; including alternative to web search engine, email and other services.

As mentioned above, the Internet is the connection of millions of computers worldwide. There are a large number of computer and electronic devices that create this network and communicate. The important thing here is global connectivity.

What are the advantages of the Internet?

What do you think about the difference between internet, intranet and extranet? Please share your thoughts with Tekrato and other users in the comment section.