Intel company in collaboration with a group of scientists from the State University of New York from the first and The most accurate deepfake detection system has unveiled a real-time app called FakeCatcher.

Deepfake In recent years, it has always been one of the controversial technologies based on artificial intelligence to create fake photos and videos, which can pose a great threat to societies and also be used for criminal and immoral purposes. Now, Intel in its latest action, from The first real-time deepfake detection system in the name of FakeCatcher has unveiled

Read more: Bruce Willis sold the right to use his face to make a Deepfake video!

The most accurate deepfake detection system

As Intel claims, this product has a high accuracy rate of 96% and works by analyzing the “blood flow” in the video pixels to provide users with the desired results in the shortest possible time.

Ilk Demir, Senior Research Scientist at Intel Labs, FakeCatcher It was designed and produced in collaboration with Amor Ciftchi from the State University of New York at Binghamton. Intel hardware and software are used in this product, it runs on a server and receives its user interface through a web platform. 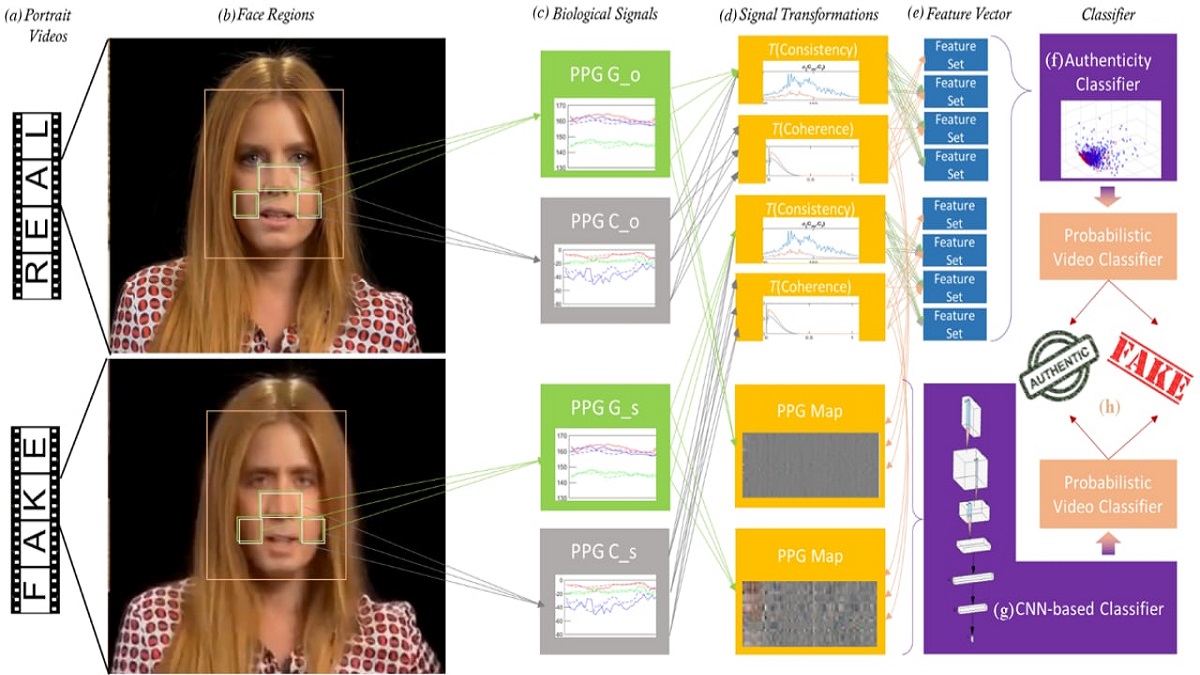 Unlike many Deep fake detection systems Based on deep learning in the field of artificial intelligence and machine learning that examines raw data, FakeCatcher’s performance is based on the information it obtains from inside the videos. In fact, this system uses the optical volume change method or photoplethysmogram, which can measure the amount of light that is absorbed or reflected by blood vessels in living tissue, which is unique in its kind. Demir told VentureBeat about this method:

You cannot see this process with your eyes, but it is computationally visible. PPG signals are known, but so far have not been used for deepfake detection.

He explained that in FakeCatcher, PPG signals are collected from 32 points on the face and then PPG maps are created from temporal and spectral components. Demir further stated:

After receiving these maps, we train a convolutional neural network on top of the PPG maps to classify them as fake or real. Then with the help of Intel technologies such as Deep Learning Reinforcement Framework for Inference and Advanced Vector 512 Extensions, we can run it in real-time with up to 72 simultaneous detection streams.

As we said, deepfake is always a troublesome and dangerous technology, and having an immediate detection system for it can be essential. However, Demir explained that the development of this system is still in the early stages and more time is needed until the final operation.

What do you think about the most accurate deepfake detection system? Share your thoughts with us technology news Follow from Tikrato. Next post Toyota Prius 2023 was introduced; The most fuel-efficient car in history!
Zubaida Naeem