At noon yesterday, Carlos Queiroz was supposed to be in a press conference with the presence of domestic and foreign journalists. Iran’s national team list for Qatar 2022 World Cup but this conference for some unknown reasons Rumors It was called pressure by some to ban Sardar Azmoun from participating in the World Cup. It was canceled.

Although the issue of pressure regarding the test was rejected by Kirosh, the announcement of the list did not take until today and passed the same night Iran’s national team list for the 2022 World Cup announced.

National team list for Qatar World Cup It has many strange things, from the presence of 4 goalkeepers, to the addition of players who were not in the camps before and even the selection of 25 players instead of 26! Actually, while the teams can take 26 players to the cup, Iran has chosen 25 players!

Another point is that Persepolis and Esteghlal have the highest quota among Iranian teams with 4 and 3 players, and the presence of 4 goalkeepers in this list is surprising. Omid Norafken can be called as the biggest star of the national team, the one who had an effective presence in the national team during Skocic’s time, he also shone in the Sepahan shirt in the past seasons and even Kirosh used him in the national team.

Fortunately, in The final list of Iran’s national team for the Qatar World Cup Sardar Azmoun’s name, which was created in special contexts, can be seen. But below is the list of national team players for the 2022 World Cup: 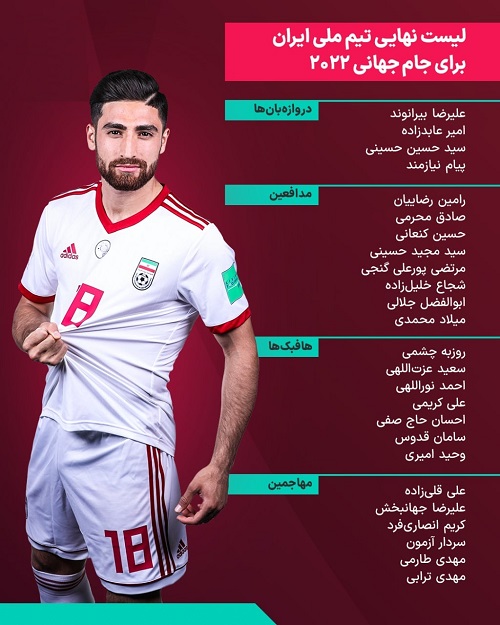 What do you think about the new update of the Google search engine for the World Cup? Share your thoughts in the comments section duplicate Share and technology news Follow with us. Previous post Internet outage and widespread filtering of social networks in Turkey; the latest news of the Istanbul explosion Next post The suspension of some important Meta projects as a result of the continuation of the financial crisis; This Zuckerberg is confused!
Zubaida Naeem