Although the mayor and head of the Tehran City Council firmly and by questioning NASA, Huge column of methane in Tehran denied, but now this matter has been confirmed by an Iranian knowledge-based company.

Huge column of methane in Tehran

An Iranian knowledge-based company became a municipality in the field Analysis of Iranian environmental satellite data It has confirmed the authenticity of the data reported by NASA in the south of Tehran.

Recently, the story of the sighting of methane piles in Iran, first in the south of Tehran and then in Fars province, became controversial. The report that the municipal waste deputy said was not referred to him and he has not seen it, and the mayor also said about it:

“All the words of NASA are lies, and this is on top of other lies!” 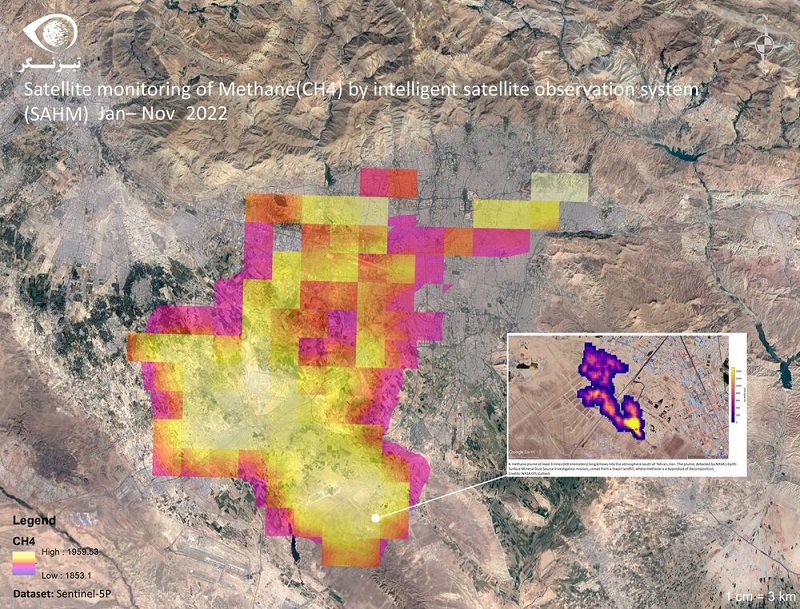 In a situation where some domestic media were trying to verify the claims and data, the head of Tehran City Council, Mehdi Chamran, claimed that the published image was not related to Iran and denied it.

These denials happen while the National Space Organization can independently investigate this matter, but the knowledge-based startup sharp By referring to European satellite images, which is the supplier of Google Map images, it has confirmed NASA’s report.

The relevant passage was produced by Smart Satellite Observations (share), a knowledge-based product of the level one of Teiznagar company. The research and development department of Danesh Banyan Tiznagarpaish Company has been able to design and produce native image processing algorithms for the identification and environmental phenomena by using satellite images and artificial intelligence.

In this report, using the data of the Sentinel 5 satellite of the European Space Agency’s Copernicus system and processing the time series of 2022 in Tehran. The amount of methane gas Has been studied. The TROPOMI instrument on the Copernicus Sentinel-5 Precursor is a rare imaging instrument that covers the wavelength imaging bands between ultraviolet and infrared.

methane (CH4) after carbon dioxide (CO2), the most important factor in Increasing anthropogenic greenhouse effect Is. Approximately three-quarters of methane emissions are anthropogenic, which is why it is important to continue to record satellite measurements. The purpose of the TROPOMI meter is to provide the concentration of the CH4 column with high sensitivity to the ground surface, good spatial/temporal coverage and sufficient accuracy to facilitate the inverse modeling of resources, in this monitoring, the time was determined from September Methane gas concentration increases, so that the average concentration of heather in this range is 1.9ppm.

By checking the map published on the NASA website and the Teizanger report, it can be seen that the areas with high concentration in the south of Tehran are the same.

What is your opinion about the huge column of methane in Tehran? Share your thoughts with us in the comments section technology news Follow from Tikrato. Next post Buying Shiba or Dogecoin? Which memecoin has a better future?
Zubaida Naeem