This morning and after The hacking of Najwa notification service A message has been sent by Anonymous to its subscribers about the recent unrest.

Notification service and Najwa email marketing This morning, he was targeted by a cyber attack and hacked. Below is a message about recent conditions sent to some subscribers.

Read more: Zarepour’s stamp of approval on the permanent filtering of Instagram and WhatsApp; “Transfer your businesses to internal platforms”

The hacking of Najwa notification service

Hours after publishing screenshots of messages sent to subscribers, Najwa’s Twitter account confirmed the news of the hack and wrote: “Najwa push notification service has been targeted by a security breach and hacked today, Saturday, 9 October. Currently, the Najwa team has stopped all its services and is trying to restore the service.

In the following, Anonymous hacker group Also, who is busy working on Iranian websites these days, by publishing a tweet and pictures of the notifications sent to users, he officially accepted the responsibility of this hack. 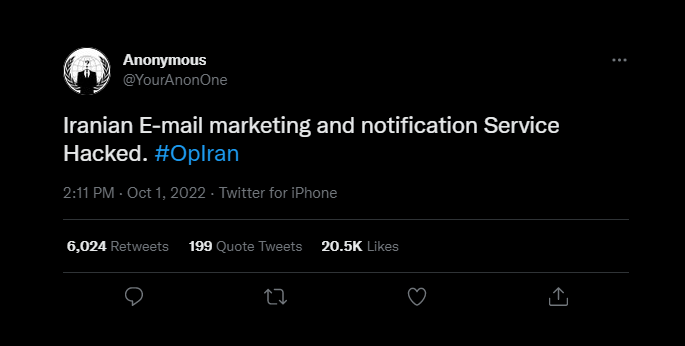 It should be noted that Najwa, which is active in the field of mobile push notification, web and email marketing, is considered one of the most popular in Iran in this field.

According to statistics, more than 8 thousand websites and applications from Whisper service use. A push notification is an SMS-like message that can include a photo, headline, and short text that is sent to business users and drives them back to their website or app. Notifications are a direct means of sending messages to the user and are opened on the user’s device without the need for the website or application to be open.

What is your opinion about the hacking of Nazwa notification service? Share your thoughts in the comments section duplicate Share and follow technology news with us. Previous post iPhone 14 Pro camera score has been published; The second best camera of the year