Full specifications of Galaxy S23 It was determined and by looking at the specification sheet of this product, it can be said that most of the rumors about it were true until this moment.

Previously, there were rumors about the use of Snapdragon 8 generation 2 and support for 8 GB of RAM in the hardware of the regular version of the Galaxy S23. Premature disclosure of the specification sheet This smartphone confirmed the previous rumors. As the end of this year approaches and the time of the introduction of the new Samsung flagship, more extensive information about the features and hardware of this product will be published by various news sources.

Recently, the normal version of this expected phone has been seen on Gigbench. The mentioned device natively supports the Android 13 operating system and its hardware includes the chip Snapdragon 8 Gen 2 And it will be 8 GB of RAM.

It must be said that Full specifications of Galaxy S23 Shared by the famous whistleblower (Yogesh Brar), and as we mentioned earlier, these specs are for the standard model of the S23 series; For this reason, it is expected that the Plus and Ultra versions will be accompanied by wider improvements. In the following, we will share the expected flagship specifications of Samsung for you, stay with us.

Galaxy S23 It supports a 6.1-inch Super AMOLED display with a refresh rate of 120 Hz, and in the upper part of the front panel of this device, we see a 10-megapixel selfie camera, which is used to make video calls and record videos and selfies. 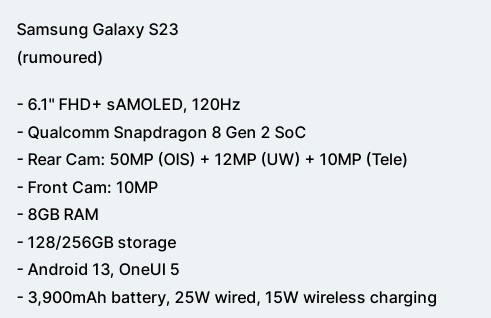 As we mentioned, the S23 hardware offers its users the Snapdragon 8 Gen 2 chip, which will be accompanied by 8 GB of RAM and 128 to 256 GB of internal memory. Samsung’s expected flagship provides users with the One UI 5 interface, which is based on Android 13 Runs.

On the back panel of this device, we see a triple imaging system that includes a 50-megapixel main camera and optical image stabilization. Next, a 10-megapixel telephoto lens and a 12-megapixel ultrawide lens complete the main camera system of the device. It should be noted that the required power of the Galaxy S23 is provided by a 3,900 mAh battery that supports 25-watt fast charging. Also, users can charge the Galaxy S23 wirelessly with a power of 15 watts.

Now that we have the full specifications of the Galaxy S23, we can confidently say that this highly anticipated product from the Korean tech giant will be able to compete with other 2023 flagships. It is likely that this smartphone will be officially unveiled at the beginning of next year. Of course, it is not necessary to wait until the time of its unveiling to know all the details of this smartphone; Because as the introduction date approaches, more information about the different versions of the Galaxy S23 will be released by various whistleblowers and news sources.

What do you think of the Galaxy S23 full specs? Please share your views in the comments section and the latest Technology News Follow with duplicates. Previous post Apple’s foldable iPad will be released in 2024