AnTuTu benchmark Ten flagship and mid-range Android phones from The best phones of October 2022 (Mehr 1401) published In the following, we will get acquainted with the list of these top phones.

Popular benchmark platform AnTuTu list Top 10 flagship and mid-range phones has published for the month of October 2022 (Mehr 1401). As always, there is competition in the best processor segment Qualcomm And Mediatek We are, which is reflected in the models in the list.

Read more: The world’s first folding iPhone was made, but Apple has no role!

Compared to the ranking table of September, there is not much change in the list. In the flagship section, in the list of the best phones of October 2022 (1401 stamp), there are a large number of available models from the processor Qualcomm Snapdragon 8 Plus get benifits; This is only one model of MediaTek Dimensity processor Available in the list. 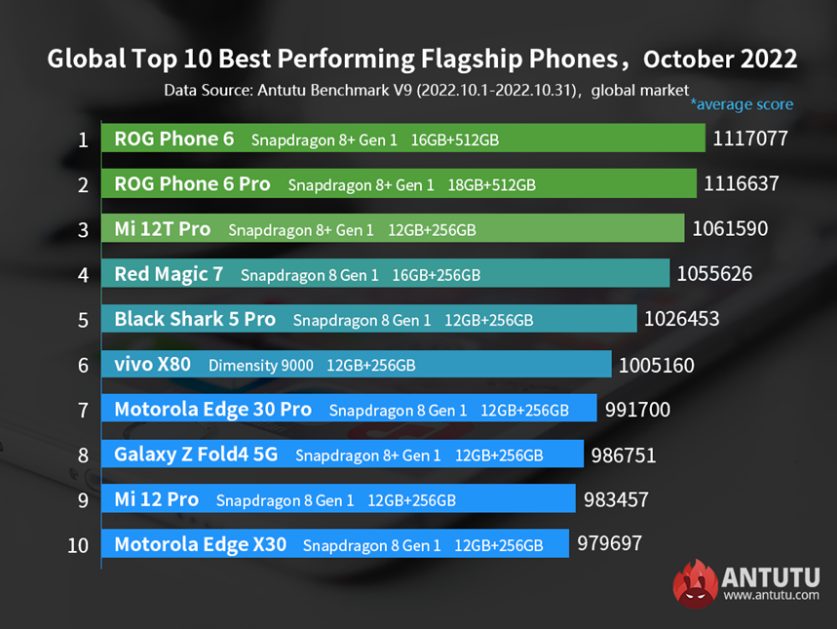 At the top of the list is the ASUS ROG 6 smartphone, of course, the closest follower is the ROG Phone 6 Pro model. Xiaomi 12T Pro is in the third place with a benchmark score of 1061590. In the rest of the list, Red Magic 7 and Black Shark 5 Pro have occupied the fourth and fifth positions.

In sixth place, the only model equipped with a processor Mediatek In the list, it is called Vivo X80, which is from Dimensity 9000 processor Uses. The next places are respectively Motorola Edge 30 Pro, Galaxy Z Fold 4 in 5G model, Xiaomi 12 Pro and Motorola Edge X30, which complete the list of top 10 phones and all of them are Snapdragon 8 generation 1 processor are equipped 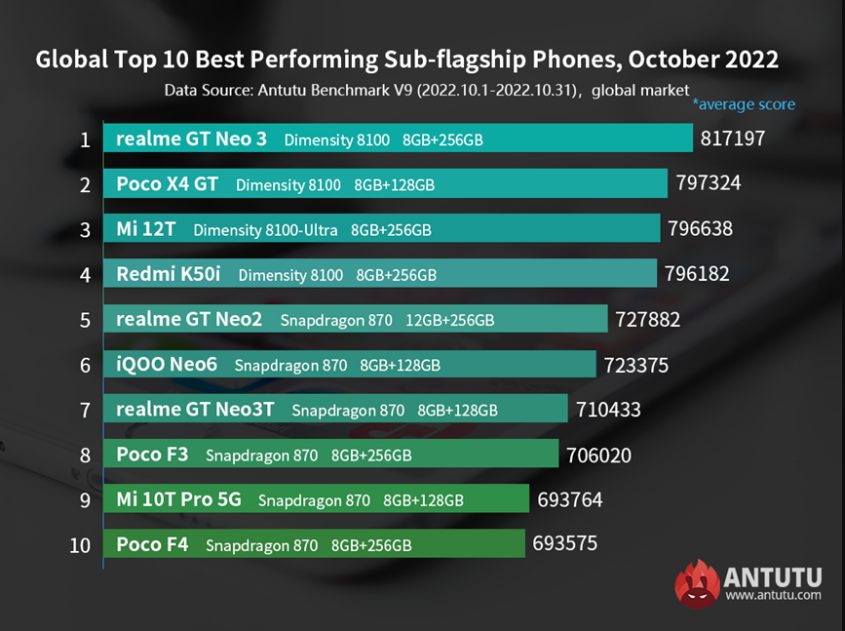 The mid-range segment is also dominated by models equipped with Qualcomm processors, but the top 4 models are also powered by MediaTek processors. Dimensity 8100 And Dimensity 8100-Ultra use. These four models, ranked in the top 4 respectively, are: Realme GT Neo 3, Poco X4 GT, Xiaomi 12T and Redmi K50i. The rest in order of rank in the list include Realme GT Neo 2, iCo Neo 6, Realme GT Neo 3T, Poco F3, Xiaomi 10T Pro 5G and Poco F4. All these mentioned phones, which are ranked fifth to tenth in the list of the best mid-range phones of October 2022, are from Qualcomm Snapdragon 870 processor get benifits.

We expect this list in November due to the release of models Snapdragon 8 generation 2 processor And Dimension 9200 At least MediaTek has made a lot of changes in the flagship segment.

Your opinion about The best phones of October 2022 What is AnTuTu benchmark? Share your thoughts with us in the comments section Technology News With duplicate follow. Next post The saddest moments of One Piece anime; Moments that made fans cry
Zubaida Naeem