According to the latest report of the Canalys statistical institute, the sale of smartphones in the second quarter of this year has dropped significantly, but despite this, Samsung is still the market leader and Xiaomi is chasing it as before.

Read more: Folding phone sales statistics in 2021; Samsung and nothing else!

Smartphone sales statistics in the second quarter of 2022

According to these statistics, smartphone sales in the second quarter of this year show a 9% drop compared to the same period last year. In these three months, as in the past, Samsung is still the leader of the sales market. On the other hand, Apple has taken back the second place from Xiaomi, and in the opinion of Xiaomi, despite its extensive activity and the production of numerous phones, it is currently struggling with the problem of lack of demand. 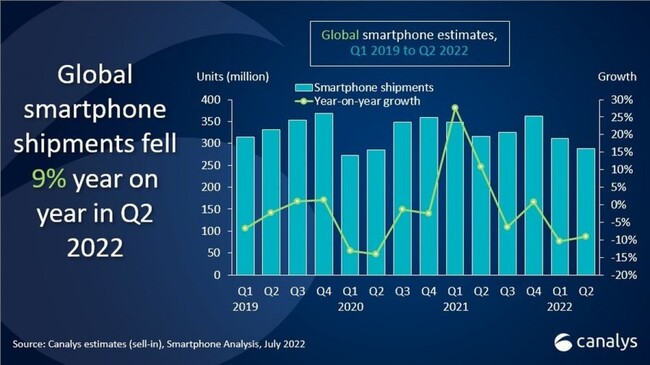 Of course, the mobile market has basically declined, but compared to the second quarter of 2021, Samsung and Apple have had sales growth of 6 and 8 percent, respectively, but the poor performance of Chinese brands such as Xiaomi, Oppo, and Vivo has led to a general decline in the world of smartphones. Sold in the field.

In the last three months, China has been forced to close several of its important factories due to the return of Corona, and this issue has led to the stagnation of the domestic market. Due to the fact that most of the component suppliers have already faced a decrease in orders, analysts believe that the phone market will no longer face supply chain problems and shortage of parts.

On the other hand, it is said that despite the numerous phone introduction events and exhibitions related to it that are planned for the second half of this year, the market will still face a decrease in purchase demand and this decrease continues. Experts have attributed the main reason for this recession to the weak performance of Chinese companies in large markets such as India and the increase in inflation around the world.

What do you think about the smartphone sales statistics in the second quarter of 2022? Share your thoughts with us in the comments section technology news Follow from Tikrato.