The new owner of Twitter yesterday started a project to bring back some blocked accounts to Twitter. But for the former president of the United States, Donald Trump, whose account was suspended under certain conditions, Musk conducted a poll on his account. Due to the end of the poll in favor of Donald Trump, Musk officially announced The return of Donald Trump’s account given on Twitter.

Read more: Facilitating the process of sending tweets on Twitter with the release of a new feature!

At the end of this poll, in which 15 million people participated, Elon Musk announced the reactivation of Trump’s account in a tweet. Now the account realDonaldTrump It is officially activated and Donald Trump’s former tweets are visible.

In a situation where Elon Musk announced after buying Twitter that he is looking for the formation of a council to monitor the content and make decisions regarding the return of blocked Twitter accounts, now without such a council. Restrictions on Donald Trump’s Twitter account It has been fixed.

Musk decided to conduct a poll yesterday, and out of 15 million participants, 51.8% ended up agreeing Restore Trump’s Twitter account They were. As you can see in the picture below, the difference between those in favor and those against is very small, and it is not even clear how many voters are robots. As a result, part of this result can be the result of the activity of robots. According to Elon Musk, 134 million people saw the survey, which means that only 11% of viewers participated in it. 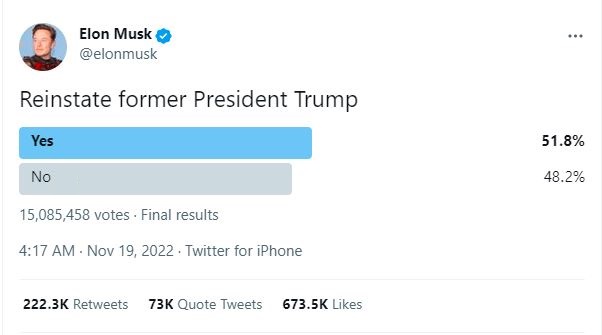 Now it is not clear that Elon Musk really decided because of the results of the survey Removing restrictions on Donald Trump’s Twitter account has taken or already decided to do so. For example, late last year, the new owner of Twitter held a survey on his account to sell 10% of Tesla shares, and after the survey result was positive, he sold his shares. However, the Wall Street Journal reported that Tesla’s CEO had decided to sell shares two months before the survey.

In any case, it must be said Donald Trump’s Twitter account It was blocked on January 8, 2021, after its supporters attacked the US Congress on January 6. From that time until today, when users opened the Twitter account of the former American president, they were faced with the message that Trump’s account was suspended or “account suspended”. But now this account is active.

After blocking his Twitter account, Trump launched his own social network called Truth Social did But since Musk bought Twitter, rumors of Trump’s return to Twitter have gained momentum. An issue that, of course, Donald Trump has officially rejected and said that he will not abandon his social network.

The former president of the United States today and in response to the question whether by removing the limit of his user account, the intention Back to Twitter “There is no reason for that,” he said. Trump will continue to stick to his platform, an app developed by startup Trump Media & Technology Group (TMTG), he added. According to him, Truth Social has much better user engagement than Twitter and is performing “incredibly well.” 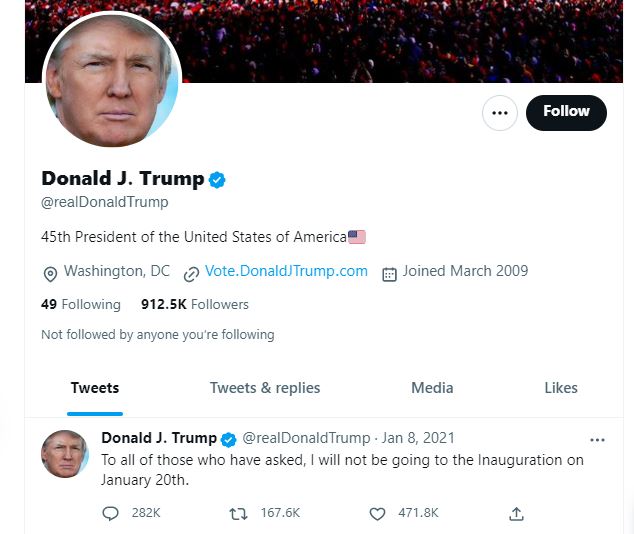 Trump also praised Elon Musk and said he has always admired him. But the former US president said Twitter suffers from a major problem with bots and spam accounts. Trump also pointed to Twitter’s myriad problems and said that the social network might survive, or we might see its imminent collapse. Next post Comparison of iPhone 15 with iPhone 15 Pro; What we know about these phones so far
Zubaida Naeem