Recently, images of Pixel watch renders It has been published on Amazon Germany, which shows the design and some of its features.

A few more days for the big Google event to introduce Pixel 7 series Will be held. But this company has surprised its audience by introducing some of the technical specifications of its new product ahead of schedule. In its new action, Google unveiled its smart watches called Pixel Watch on Amazon Germany. Photos of the appearance of the device have been displayed on this website.

More read: The price of the Pixel Watch was revealed; More expensive than the best in the market!

Images of Google smart watch Published on OnLeaks, which shows that the company’s new product has four straps with different colors. As seen in the pictures, the strap of one of the watches is silicone and will be available in black, gray, white, green and silver colors.

Another strap designed for this new product is woven and produced in orange, green and black colors. It seems that two leather straps have been considered for this product, which has its own fans. It should be noted that the Google event is scheduled to be held on October 16, 1401. 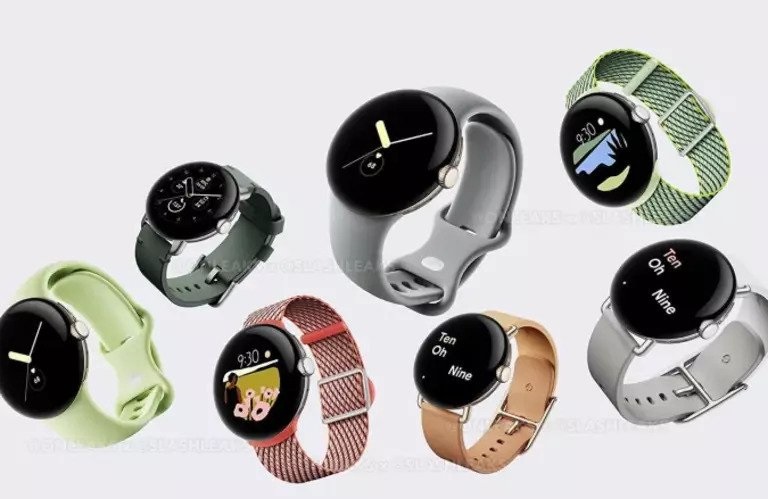 Also, in the published images, we can see that this watch face is designed in the form of analog clocks and has information such as heart beat are equipped In these images, two other watch faces can be seen, one of them has a design similar to a landscape, and in the next watch face, time is displayed in the form of letters.

Another item is considered for this new product, which can be Fitbit service integrity Pointed with the Pixel Watch. A pedometer, electrocardiogram (ECG) sensor, emergency call capability and support for quick connection of devices are other features of these new products.

This new product is equipped with other things such as Gorilla Glass screen protector, Exynos 9110 processor and 5ATM waterproof standard, and its battery will charge up to a full day.

Previously, it was said on Amazon’s website that if users buy this device, they will get six months Free subscription to Fitbit Premium They will have access to which the corresponding page has now been deleted.

The point is that it was said on this page that the Wi-Fi version of the Pixel Watch will cost 356 euros and can be connected to the Google Home app. However, it is not clear whether users in all geographic regions will have access to this feature.

What do you think about the latest renderings of the Pixel Watch? He shared his opinions with Tekrato in the comments section Technology News Follow with duplicates.