After Elon Musk’s unsuccessful launch of Twitter Blue Money, changes were made to the service. One of these changes bought a blue tick after 90 days by New Twitter users Is.

After taking over the company twitter By Elon MuskSome features of this application have been changed. One of these changes is related to monetization Twitter blue tick subscription Was. But the launch of this service faced problems.

Twitter Blue subscription is eight dollars which included the blue tick of the approval of this social network, was officially presented to iOS users last week and these users can register in it to receive blue tick had the However, many problems occurred after this process which led to Account spoofing Many users including even Elon Musk himself.

Many impersonators have spoofed celebrity accounts after receiving a blue tick. In the meantime, account “Jesus Christ” It was among the accounts that managed to receive its blue tick.

Due to these problems, Twitter decided to register as a preventive measure New Twitter users It has stopped the service and now it seems that new restrictions have been put in place to prevent such problems from happening in the future.

Read more: Elon Musk’s reaction to the collective resignation of Twitter employees; I do not care!

According to the explanations mentioned on Twitter’s website, this company will probably start on December 8 after restarting the subscription service. Twitter Blue to users who are members of this social network Less than 90 days will not allow registration in it.

So new Twitter users can’t immediately purchase this subscription and receive a blue tick of approval immediately after creating a new account. This decision on the page About Twitter Blue It has been officially and publicly announced from Twitter’s official website. This action can be considered as a solution to reduce fraudulent accounts and impersonating accounts of others (especially famous people). In fact, it will be able to solve the problems of this social network since the launch of this service. 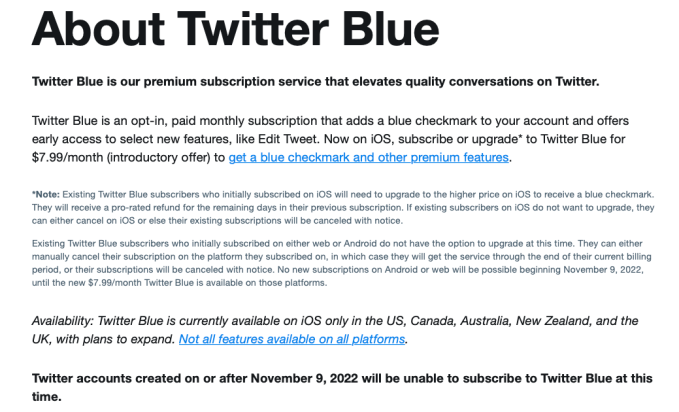 In addition, Twitter’s new CEO Elon Musk has announced that after the service’s relaunch, verified accounts at the time of their username change will lose their blue tick until Twitter has reviewed and reconfirmed that it followed its policies. Social networking, get it back. Musk also said that if he plans to create an account Parody you have, you must mention this in your biography and account name.

According to the archive version provided by Wayback Machinethe old Twitter app did not have a specific waiting period before this, but included a warning that “Twitter accounts created on or after November 9, 2022 (18 Aban 1401) are not allowed to subscribe to Twitter Blue.” Next post Facilitating the process of sending tweets on Twitter with the release of a new feature!
Zubaida Naeem