Motorola’s new smartphone, the Motorola Edge 30 Neo, which is scheduled to be unveiled in the near future, has recently been spotted on the Geekbench database.

One of the upcoming smartphones from Motorola is the Edge 30 Neo. Probably, this device will enter the market as a rebranded version of Edge 30 Lite, which has not yet been officially unveiled. As the Edge 30 Neo has been spotted on the Geekbench benchmark by news website MySmartPrice, it is likely that we will see an official launch of the phone in the next few days.

Information on the Geekbench database of the Motorola Edge 30 Neo indicates that the phone will have an octa-core Qualcomm chipset, with six 1.80 GHz cores and two 2.21 GHz cores. According to the observed source code, this phone probably uses Adreno 619 GPU and Snapdragon 695 chipset.

Also, according to the information available on Geekbench, this device has scored 664 points in the single-core test and 1848 points in the multi-core test, and it will come with 8 GB of RAM and Android 12 operating system. 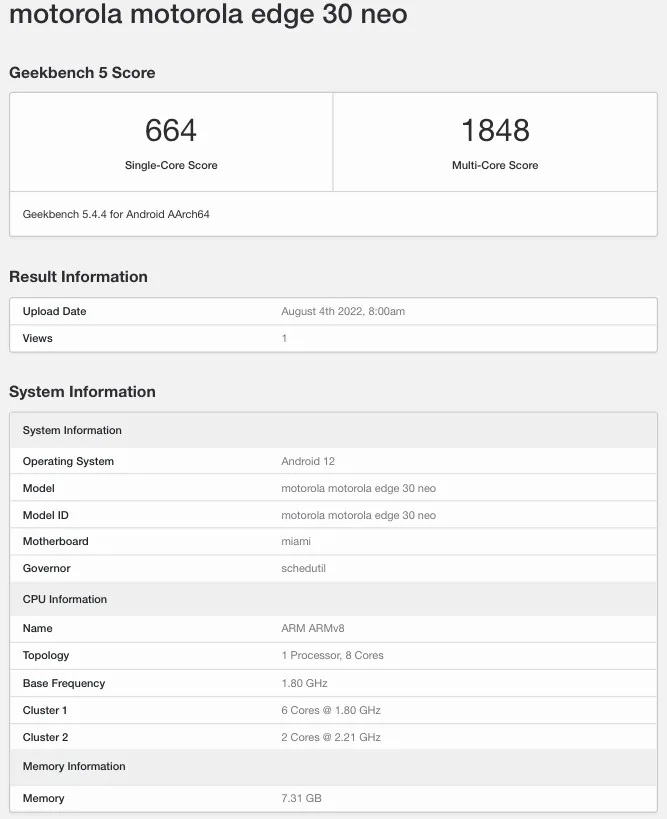 Motorola Edge 30 Neo will have a 6.28-inch P-OLED screen with full HD+ resolution and 120 Hz refresh rate. It is expected that this device will enter the market with Snapdragon 695 and in two versions with 6 GB and 8 GB LPDDR4x RAM. These two versions may come with 128GB and 256GB of internal storage, respectively.

The rear camera system of the Edge 30 Neo includes a 64-megapixel main camera and a 13-megapixel ultra-wide camera. There is also a 32-megapixel camera on the front for taking selfies. This phone, which is considered a thin phone with a thickness of about 7 mm, is powered by a 4020 mAh battery.

Motorola Edge 30 Lite is expected to be unveiled in the third quarter of this year. According to previous leaks, this device, which is the successor to last year’s Edge 20 Lite, will be available in Europe at a price of 399 euros.

What do you Tekrato users think about Motorola Edge 30 Neo? Share your opinion with Tekrato in the comments section and Technology News Follow with us. Previous post Solana’s multi-million dollar hack: who is to blame? Next post Ark Invest: The possibility of 240% growth of Bitcoin is high
Zubaida Naeem