These days, the situation on Twitter is chaotic and experiencing an inflammatory atmosphere. Now, in the latest move, An employee was fired for criticizing Elon Musk It has been reported.

The new owner of Twitter recently He fired many employees but one of the most recent ones seems to have been purely a matter of personal enmity and decision. Elon Musk says the employee who questioned his comments about the Twitter app being slow has been fired.

An employee was fired for criticizing Elon Musk

The story started when the mask tweeted from the users because Slow app in many countries apologized and said it’s because their app sends over 1000 remote control (RPC) requests in a non-standard and sub-optimal way to load the home timeline; In other words, the application must make requests to different servers and wait for their responses.

In response to Musk, Eric Fraunhofer tweeted that he has been working on Twitter’s Android app for about six years and doesn’t believe Musk’s claim is true. Fraunhofer went on to explain that Twitter doesn’t actually have any RPCs. The app instead sends about 20 background requests on startup. 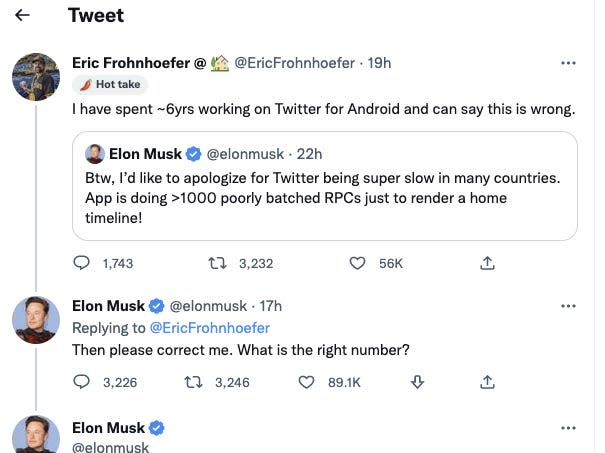 “No wonder you don’t know that up to 1,200 microservices are called when a user uses an application,” Musk replied. Fraunhofer again refuted Musk’s claim, writing that the number of these microservices for the home timeline is closer to 200, not 1,200.

The conversation continued over several more tweets, but eventually users debated whether or not Fraunhofer should have continued his responses in a private Slack channel. It was here that Musk wrote, “He’s fired,” in response to a user who said he probably didn’t want Fraunhofer at his company anymore.

Fraunhofer told Forbes magazine that it took about five hours for Twitter to block his computer’s access to the company’s servers, but he has yet to receive any official notice that he has been fired from the company. But Fraunhofer has now announced in the description section of his Twitter page that he is a former employee of this company.

Many users criticized Elon Musk in response to this incident, and one of them was “Sasha Solomon”, who said that he is one of the senior technical engineers of Twitter. He criticized Musk for not knowing Twitter’s infrastructure, and hours later claimed that he too had been fired.

In response to Elon Musk, another user pointed to his tweet after buying Twitter that he hoped even his harshest critics would remain on the social network and wrote: “I think you meant that you hoped your harshest critics would only be on the social network.” Stay at Twitter, not at Twitter Inc.” Of course, Fraunhofer has stated that the way he responded to Elon Musk was definitely not measured, but it seems that he is not too upset about this dismissal.

However, changes and developments after Purchase of Twitter by Elon Musk It continues and it is not clear who will be the next victim of the new owner’s decisions.

What do you think about firing an employee for criticizing Elon Musk? Share your thoughts with us technology news Follow from Tikrato. Previous post Failure of bread subsidy smart plan; Has the government made a mistake in its calculations? Next post The IQ score record of people under 18 years old was broken; A child above Einstein and Hawking
Zubaida Naeem