Since this morning, there have been news about the role of Abararwan in internet filtering and restrictions. now Abararwan’s official statement He strongly denied this.

Rumors about it since a few hours ago Abararwan’s role in internet filtering in the country has been raised In fact, the story is indirectly linked to this company, which has had the experience of facing such accusations before. But now Abararvan has strongly denied all the accusations and announced that he will pursue his rights in international courts.

Read more: Before criminalizing the use of filter breakers, transparency should be made regarding the filtering itself[گفت و گو با حامد بیدی]

The story is that the other day, some German media reported on the effective role of a company called Soft Cloud Apply internet restrictions Widespread in Iran. In the report published by these media, it was pointed out that Soft cloud In fact, it is a cover subcategory belonging to Abararwan, but Abararwan claimed that the contract with Soft Cloud has been completed for 20 days in response to the same media’s questions.

However, last night, the German Foreign Minister announced in a live TV program that he will deal seriously with companies that operate in Germany. Internet restrictions They help in Iran.

Now and after this news became public in the Persian-language media, Poya Pourhsinlou, CEO and co-founder of Abararvanin his Twitter account, the company’s official statement rejecting the accusations related to Cooperation in internet outages republished and wrote:

For a long time, we have been unfairly pressured by Siebel, which should be directed at “Iranian sovereignty” and filtering companies. We categorically reject the accusations and, faithful to the usual “transparency”, we are ready to cooperate with domestic and foreign independent technical bodies to review the infrastructure and products. #Abra Arvan Are.

The full text of Abar Arvan’s statement, in response to the accusation Cooperation in restricting the Internet in Iran You can see below: 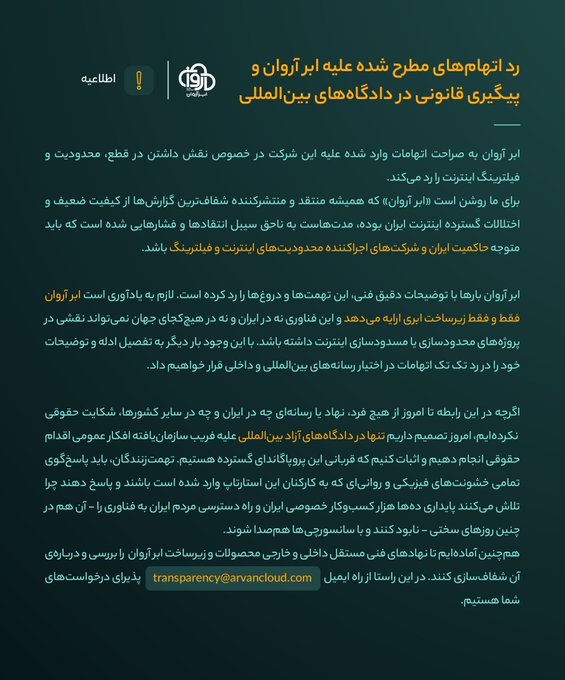 What is your opinion about the possibility of Abararvan’s role in Iran’s internet filtering? Share your comments with us in Tikrato Technology News Follow with us.