In the following, two popular and popular phones from Samsung’s A family have been compared. If you want to know the result of this debate, stay with us by comparing Galaxy A12 with Galaxy A21s.

Galaxy A12 and Galaxy A21s are in the A series category. The price of Samsung A12 and A21s is proof that these phones, besides being affordable, also have good options that can be chosen by professional users.

According to Techtrends.news, the A series, which was actually a rightful replacement for the older Samsung J series, was able to take a step beyond a normal budget phone in the global charts by incorporating options borrowed from flagship phones along with more economical and medium options.

Also, the use of high-quality materials and a luxurious and modern appearance, along with options such as an optical fingerprint sensor, etc., have defined the A series as a complete and perfect series for Samsung’s discerning users. The comparison of Samsung Galaxy A12 and Galaxy A21s follows. Stay with us for more information.

Galaxy A12 vs Galaxy A21s comparison

Galaxy A12 and A21s are two well-made Samsung phones and are among the best-selling phones. These two phones with suitable features along with a reasonable and competitive price have taken a major share of the affordable phone market and are currently among the best mid-range phones in the market. Be with us by comparing these two models.

Comparing Galaxy A12 with Galaxy A21s in terms of design and construction, we come to the first noticeable difference between these two phones in the back frame. Where Samsung has introduced A12 with a new design.

The back panel of this phone consists of two parts. The lower part, which makes up about a third of the back frame, is glossy, and the upper part is designed in a matte way and has a texture similar to the weft of a carpet. The use of this design, in addition to giving a special charm to the A12’s back cover, has caused fingerprints and smudges not to remain on it, and the phone does not slip easily in the hand. In contrast, the A21s looks similar to the high-end models of its A-series family. Its back frame is glossy glass and when exposed to direct light, it reflects the light and gives it a rainbow effect. Integrating the power button and the fingerprint sensor makes the back of the A12 completely integrated, uniform and beautiful, and makes us give the A12 an edge in the design department when comparing the A12 with the A21s.

The best Samsung phone in terms of battery and charge maintenance

The best Huawei phones in terms of battery and charge maintenance

The display is one of the parts that make it a little difficult to compare the A12 and A21s. There is not much difference between these two phones in terms of display; Both use a 6.5-inch panel with PLS IPS technology. 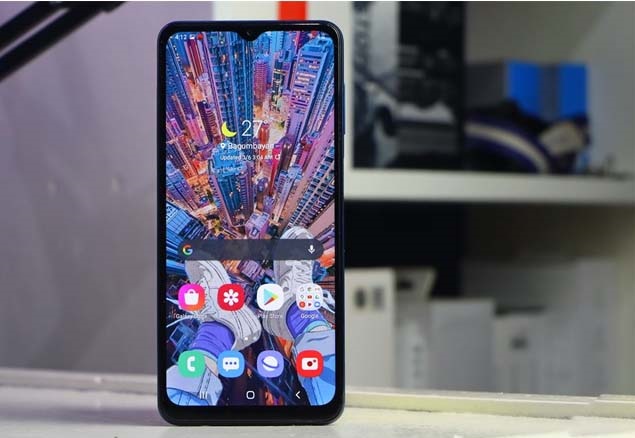 The pixel density of both is around 270 pixels per inch and they offer equal resolution. Of course, the A12 has a smaller margin than the A21s, which has a screen-to-body ratio of about 82%, by devoting 84% of the front frame to the display. In any case, looking at the screen of both phones, we can see that they offer an acceptable quality as a mid-range, the resolution of the image is very suitable, and the combination and separation of colors is done well.

Finally, if the display is important to you, it doesn’t matter whether you choose the Galaxy A12 or the A21s.

Comparison of Xiaomi Note 10 Pro with Samsung Galaxy A72

Comparison of Poco X4 Pro with Samsung Galaxy A51 (POCO X4 Pro Vs. Galaxy A51)

Compared to the Galaxy A12 and Galaxy A21s, the main quad camera has three identical modules except for the different layout. These sets include a 48-megapixel sensor with an aperture of f/2.0 with PDAF capability as the main camera and two 2-megapixel macro and depth sensors with completely similar specifications. 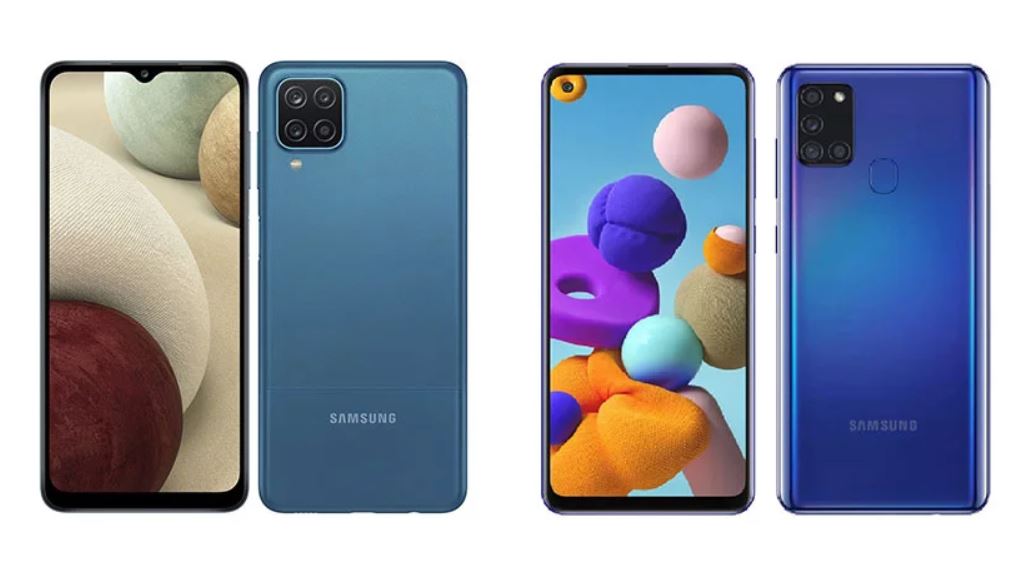 So if you’re into architecture or landscape photography, the A21s is definitely a smarter choice than the Galaxy A12. This sensor allows you to have more of the foreground along with the surrounding elements in your frame. 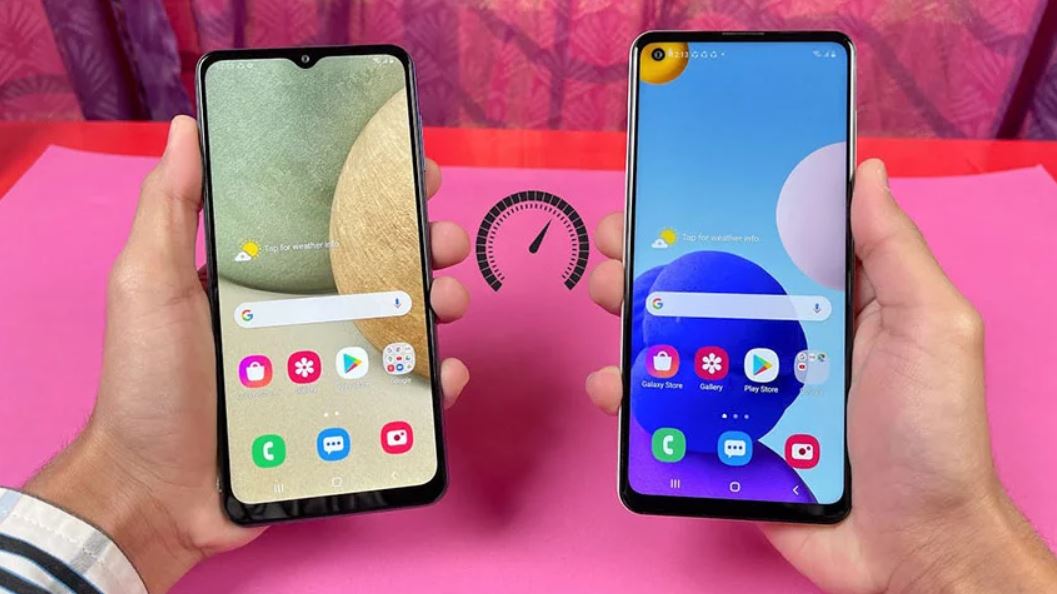 Samsung has smartly made a bold decision for both the A12 and A21s and used a large 5000 mAh battery. This means that both phones will have a high capacity in continuous and long-term use. On paper, the battery of both phones is sufficient for a day and a half of normal use, and there is no need to worry about this. Comparing the A12 mobile phone with the A21s, there is another similarity in the battery part, and that is the use of both versions of the 15-watt fast charging feature, despite which their full charge takes almost 2 hours.

Comparison of Galaxy A12 with Galaxy A21s in terms of software

In terms of software and user interface, it should be said that both devices have entered the market with Android version 10, but Galaxy A12 comes with One UI 2.5 and Galaxy A21S with One UI 2.0.

It is also possible to upgrade the installed operating systems to Android 11. The latest version of Google on these phones has new features like screen recording, grouping of conversation notifications and more data protection. Galaxy A12’s fingerprint sensor is located on its side; Meanwhile, this sensor is placed on the back of Samsung A21s and this model also supports facial recognition. Both models have Bluetooth 5.0, GPS, USB-C input and 3.5 mm jack input.

The Galaxy A12 only has Wi-Fi access in the 2.4 GHz range, while this range goes up to 5 GHz for the Galaxy A21S. A negative point about these new products is the lack of NFC support.

Comparison of Galaxy A12 and Galaxy A21s in terms of hardware

Samsung has used different chips for these two models of its phones. The A21s has been launched with Samsung’s exclusive Exynos 850 chip, while the A12 is equipped with a MediaTek Helio P35 chip.

Comparing A12 with A21S in terms of hardware, it should be said that Samsung’s chip is made with 8nm technology, but the Mediatek Helio P35 chip has a 12nm architecture. On paper, this gives the A21s more power. In reality, this is also true and it must be said that the A21s scores more points compared to the A12 in performance and speed tests. Also, in the execution of graphic programs, the tip of the scale is slightly heavier towards the A21s phone and provides better performance.

These two phones are mid-range phones in the market and provide you with enough power to do daily tasks. In fact, comparing A12 with A21s in terms of operation speed, there is no significant difference between them, and both phones are very powerful.

In this section, we will check the sound quality of these two phones. In terms of speakers and audio sources, both phones are equipped with a 3.5 mm headphone jack through which you can connect to various headphones. Also, the speakers in the two phones are similar and normal and non-stereo. But the audio range is acceptable and the output sound is loud and noise-free.

Only if the sound is turned up to its maximum, it will be slightly less transparent, which is completely natural and expected in affordable phones like the mentioned examples.

In this article, we reviewed and compared Galaxy A12 with Galaxy A21s. The competition within the A series family and between these two phones is very hot. This made it very difficult to compare the A12 with the A21s as the two phones are similar in many respects. In the comparison of Samsung Galaxy A12 and Galaxy A21s, very small points should be paid attention to in order to find a difference between these two phones. This article will help you find answers to your questions.

Should we buy Galaxy A12 or Galaxy A21s?

The Galaxy A21s phone was one of the best and best-selling mid-range phones of 2020, which was superior to many of its competitors in the market in terms of processing power. The superiority of this phone is evident in the speed of operation and smoother execution of programs and games compared to A12, but in other parts, i.e. battery, display and camera, both phones provided good and satisfactory performance and none of them was superior to the other. On the opposite side, the Galaxy A12 phone, with its considerable progress compared to its previous generation, the A11, came on the heels of the A21s in this competition and appeared even better in areas such as the design. Finally, comparing the A12 and A21s, it is not possible to definitely vote for the superiority of one of the phones, and in many ways both phones are similar, but if you care about the speed of operation and the processor of the phone, we recommend the A21s.

What do you think of the Galaxy A12 vs Galaxy A21s comparison? Please share your thoughts with Tekrato and other users in the comment section. Next post Bitcoin price prediction in 2030: What can we expect from BTC?
Zubaida Naeem