Intel with official introduction 13th generation Intel Raptorlake processors It put an end to many expectations and rumors. According to the claim of this giant of the semiconductor industry, the single and multi-core performance of this processor has been improved by 15 and 41 percent, respectively, compared to the 12th generation.

An important point that should be mentioned at the very beginning is that Intel has only unveiled the desktop processors of this series and we will have to wait a while to introduce the Raptor Lake laptop processor series.

The highest-ranking member of this new series of Intel processors, Core i9-13900K It is called, of course, its version without iGPU will be launched in the markets under the name of Core i9-13900KF. This processor has the same hybrid architecture as its previous generation and includes 8 powerful P cores and 16 low-power E cores. This product also has 32 threads.

Another processor of this series that was introduced today, Core i7-13700K It has 8 powerful cores, 8 low-power cores and 24 threads. 24 MB of L2 cache memory and 30 MB of L3 cache memory are used in this processor, and the maximum frequency of its powerful and low-consumption cores reaches 5.4 and 4.2 GHz, respectively. The thermal design power of this model is not different from the flagship model and has the same mode of 125 and 253 watts. 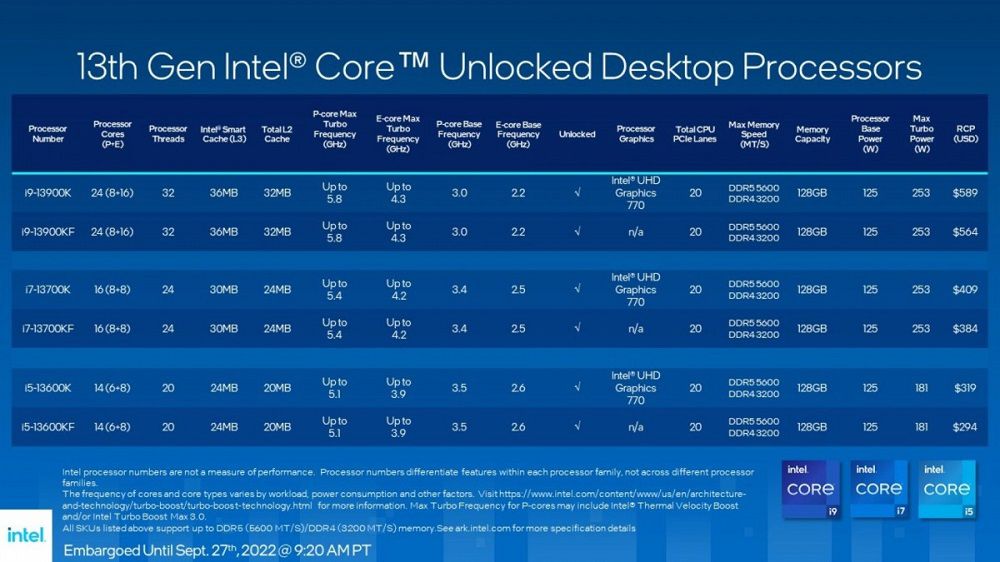 The latest processor of this series that is currently introduced, Core i5-13600K It is called that it consists of 6 powerful cores and 8 low consumption cores and a total of 20 threads. This processor also has 20 MB of L2 cache memory and 24 MB of L3 cache memory, with the maximum frequency of its E and P cores reaching 5.1 and 3.9 GHz, respectively. The thermal design power of base and torio of this product is 125 and 181 watts, respectively.

All models introduced by Intel have 20 PCIe lanes, including 16 PCIe 5.0 lanes and 4 PCIe 4.0 lanes, DDR5 5600 and DDR4 3200 RAM, and faster memory via XMP. Also, the integrated Intel UHD Graphics 770 graphics processor is used in the non-F models of this family. The new Raptor Lake processors work with new Z790 chipset motherboards and even older 600 series motherboards.

The price of 13th generation Intel processors It has already been announced, but you should know that the final price of these products may be slightly higher than these figures for the final consumer. But the announced prices are as follows:

According to Intel, 13th generation Intel processors along with new motherboards from date Mehr 28 (October 20) are launched on the market.

What do you think about the 13th generation Intel Raptorlake processors? Share your thoughts with Tekrato in the comments section Technology News Follow with us.